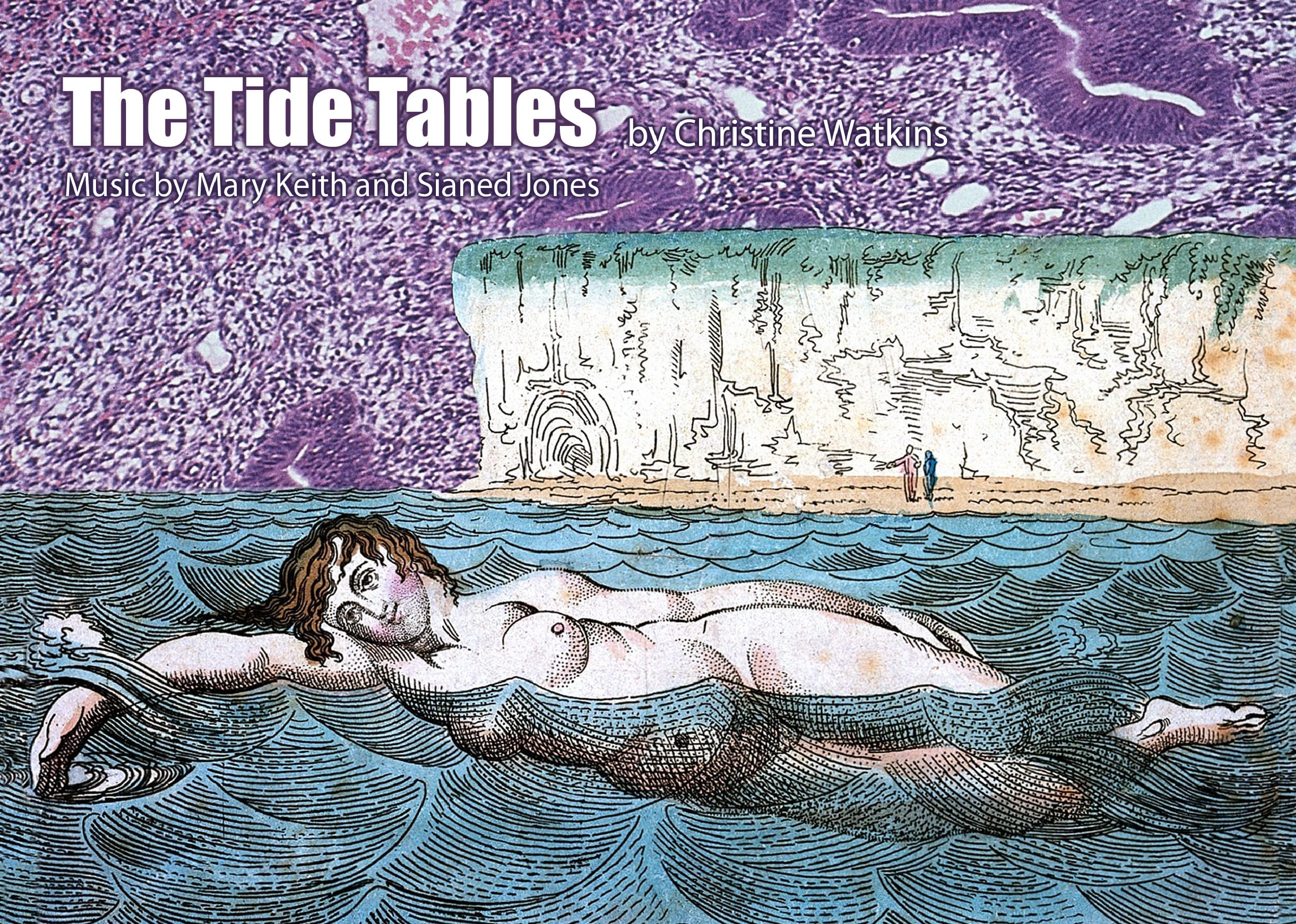 Following a successful pilot production at the Courtyard in Hereford in 2009 supported by the Wellcome Trust and the Society for Endocrinology, Christine Watkins of Honeysuckle Direction, in co-production with the Centre for Performance Research, won further backing from the Wellcome Trust to allow this new play to undertake a small UK tour.

Spanning arts/science boundaries, the story of The Tide Tables centres on one woman’s midlife beach holiday, where she finds herself stranded with an a capella vocal group (Beach Radio) and a mysterious lifeguard. Within the shifting, poetic landscape of her narrative, the sung and spoken text moves between scientific texts on menopause and midlife ageing, personal memories, strange dreams and a range of handy – and not so handy – hints from current literature on the subject.

The play includes a powerful score composed by Sianed Jones and sparkling a capella songs by Mary Keith, all performed live by them and the rest of the cast.

The play also features the voice of Professor Saffron Whitehead from St George’s University of London, who provided the scientific input.

The midlife phase is a time of significant biological change. ‘Hormones’ are spoken of easily – often jokingly – when referring to aspects of this time. Yet outside the medical profession few people would be able to say with much clarity how hormones really are involved in, or central to, the major shift that occurs in our physical state in our forties and fifties. In particular, the transition for a woman from the time of fertility to infertility is clearly significant on many levels. As a way of responding to this transition, forms of HRT have now been available to three generations of women. However, its relative advantages and disadvantages in the wake of recent major studies continue to be under dispute, and, to quote a recent article from The Endocrinologist magazine (Issue 78) what is available to the general public is a “pile of advice” that can be complex and unclear.

The Tide Tables is a performance that engages the audience in the biomedical narrative that informs our understanding of midlife, and explores how the biomedical interweaves with other levels of narrative.

Christine Watkins has written for Welsh National Opera, Foursight Theatre, the British Film Institute, Feelgood Productions, Made in Wales, Pentabus and many others. She also writes and performs work with her company, Honeysuckle Direction, exploring the linked pathways of art and science. www.honeysuckledirection.org

Sianed Jones works as composer and performer for The Royal Shakespeare Company, including the Olivier Award winning History Season 2007/8. Her vocal research has taken her to Egypt, Kenya, Tanzania, Madagascar, Mongolia, Kazakhstan, and Kyrgistan. www.sianedjones.co.uk

Mary Keith is a musical magpie, improviser and multi-instrumentalist. She has composed music for Foursight Theatre, Pentabus and Channel 4, run education projects for Glyndebourne and the Scottish Chamber Orchestra and sung Bulgarian love songs in Japan.

The Wellcome Trust is a global charitable foundation dedicated to achieving extraordinary improvements in human and animal health. It supports the brightest minds in biomedical research and the medical humanities. The Trust’s breadth of support includes public engagement, education and the application of research to improve health. It is independent of both political and commercial interests. www.wellcome.ac.uk

“Entertaining, witty and fascinating… ”
“A show which makes the pituitary gland work effectively as a lyric!”