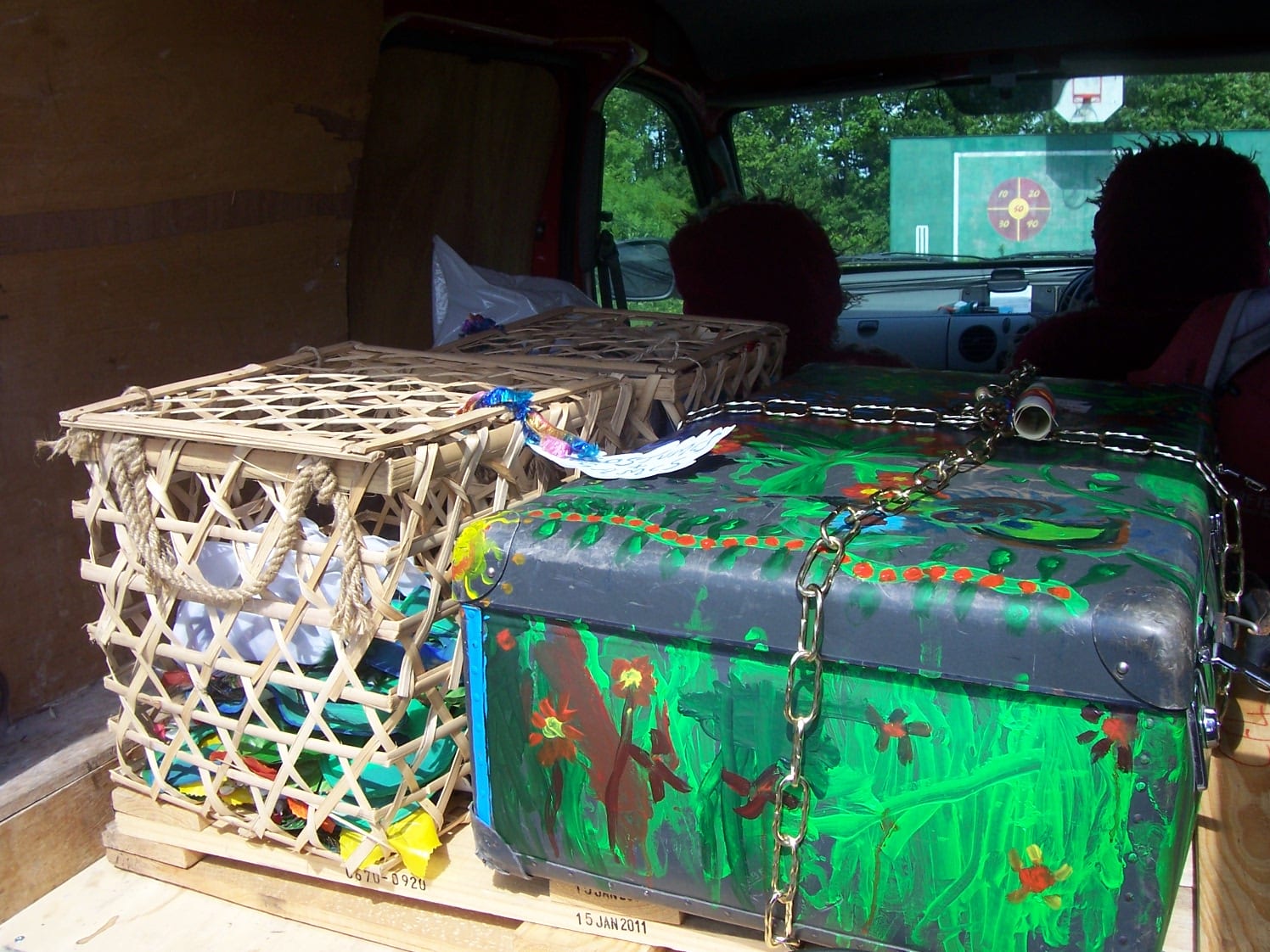 The Centre for Performance Research and Ymlaen Ceredigion, with the assistance of five skilled arts facilitators, worked with five groups of young people across Ceredigion over 10 weeks to design a feast to be ‘performed’.

Groups in school or community settings in Penparcau, Llanarth, Cellan, Llandysul and Newquay designed feast boxes and their ingredients to send to one of the other communities to be unpacked, explored and devoured.

The ingredients of the feast consisted of food, costumes, props, scripts, puppets, pictures – and anything else inspired by their local area and the groups’ imaginations. Additional inspiration was provided by a visit from the theatre company ‘Kindle Theatre’, who are based in Birmingham and specialize in performances that contain food.

The process was filmed by students from the department of Media Production, School of Art, Film and Media, University of Wales, Lampeter who also documented the final feasts as they were received and opened. The footage was shown to the groups during the second phase of the project: a community feast  designed, staged and performed by CPR for the participants of phase one, and an exhibition/display and the public screening of the documentary film produced by University Wales, Lampeter, shown in Aberaeron as part of the food festival.

CPR was commissioned by Ymlaen Ceredigion to lead on the Out of the Box: Unfolding Feasts project, acting as first point of contact for the arts facilitators, visiting artists and documentation deam. The company’s Artistic Director, Richard Gough, has extensive experience in the field of performance, food and cookery. His Last Supper series of productions and installations has shown in Amsterdam, Florence, Aberystwyth and Madison, USA.

Ymlaen Ceredigion is a not-for-profit organisation supporting communities in acquiring the awareness, understanding and skills they need in order to fulfil their social, economic and environmental needs. In recent years its work has included a partnership with Ceredigion Local Health Board and Ceredigion Public Health Team on inequalities in health and subsequently this lottery funded Way of Life programme. Ymlaen Ceredigion employed three community development workers and a part-time manager to deliver this programme.

Iachus staff at Ymlaen Ceredigion will use their skills, experience, contacts and time, working with others where appropriate, to act as community links and facilitators.

Hywel Dda Health Board provides healthcare services throughout Ceredigion, Carmarthenshire and Pembrokeshire. The LHB made a successful bid to the BIG lottery fund for this project and had overall responsibility for complying with the terms and conditions of the grant.

The BIG Lottery Fund awarded grants to 14 projects in Wales as part of the Healthy Families Initiative. The programme is testing new ways of promoting healthy eating and physical activity among children under 12 years old and their families. BIG appointed Hall Aitken to provide support and evaluation for the programme.

Programme Aim and Background in Ceredigion

The project was known as “Iachus gyda’n gilydd / Healthy Together” (“Iachus” for short). It worked with children aged 3 -11 and their families, to raise awareness and change attitudes and behaviour around healthy eating and physical activity. The project operated in five regions in Ceredigion: Llanarth, New Quay, Llandysul, Penparcau and Llangybi. Iachus adopted a fun, celebratory based approach to engage communities through local events and activities. The project was committed to consulting and involving children and their families at the outset so that any activities were supported and more likely to be sustainable. Its methods were intended to help children experience healthier lifestyles as fun and easy to access. Activities included bicycle powered smoothie and water pumping machines, gardening, cooking, farm visits, forest schools, martial arts, canoeing, wild food walks, conservation work, development of outside play areas, community ovens, fishing trips and open access play.