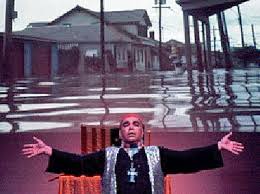 The Cone of Uncertainty: New Orleans after Katrina
Written and Performed by José Torres Tama

New Orleans performance artist José Torres Tama managed to escape the social chaos that submerged the city after Hurricane Katrina on a stolen school bus, which was operating a rescue mission of Creole families. In “The Cone of Uncertainty” he tells his survival story and explores the criminal negligence of federal officials, and the apocalyptic abandonment of a people who were made to beg for help and water in front of national TV cameras.

He also comments on larger issues concerning race and class in the U.S., the historical context of the storm, and the displacement of thousands of Latinos, whose traumatic stories were mostly ignored by the mainstream press. Combining personal stories, storm film footage, and a variety of characters he inhabits deftly, Torres Tama offers a “live art” performance solo that is politically provocative, visually engaging, and profoundly moving.

Torres Tama is both a versatile writer who can be lyrically evocative as well as bitingly humorous, and an impressive performer. -The Philadelphia Inquirer

“The Cone of Uncertainty” is supported by the National Association Latino Arts & Culture, Ford Foundation initiative and the Louisiana Division of the Arts.

José Torres Tama will engage workshop participants in an interactive exchange exploring creative strategies such as movement, improvisation, visual rituals, conceptual activity, incantations and multiple voices used in performance practices. The “creative arsenal” of film, recorded narratives/music, and projections to develop multidisciplinary work will also be explored. Participants are encouraged to bring in monologues, poems, or their own conceptual ideas to develop in the workshop process.

This intensive workshop is aimed at performers, directors, dancers, teachers – anyone who is interested in creating multidisciplinary work.

José Torres Tama is an interdisciplinary artist fusing multiple genres with fervour and craft. Working in spoken word poetry, sound art, installation, visual, and performance art, he explores the effects of media on race relations, the “American Dream” mythology, and the Latino immigrant experience. His performances thrive on a fusion of bilingual texts, movement and rituals, and exaggerated personae—creating spectacles that are visually dynamic and politically charged. He has worked in the New Orleans arts community for twenty years, and since 1995, he has toured nationally and internationally to present his solo performances, workshops, and academic lectures on performance art as a tool for social change.

As an arts educator, his “Youth Performance Projects” with marginalized Latino and African American teens employ performance art as a creative strategy to cultivate young voices. These projects have been profiled on National Public Radio, and praised as empowering examples of how community arts projects can transform young lives. He has also worked with men recovering from drug addiction and the stigma of incarceration in performance projects designed as tools for creative redemption and reinvention of the self.