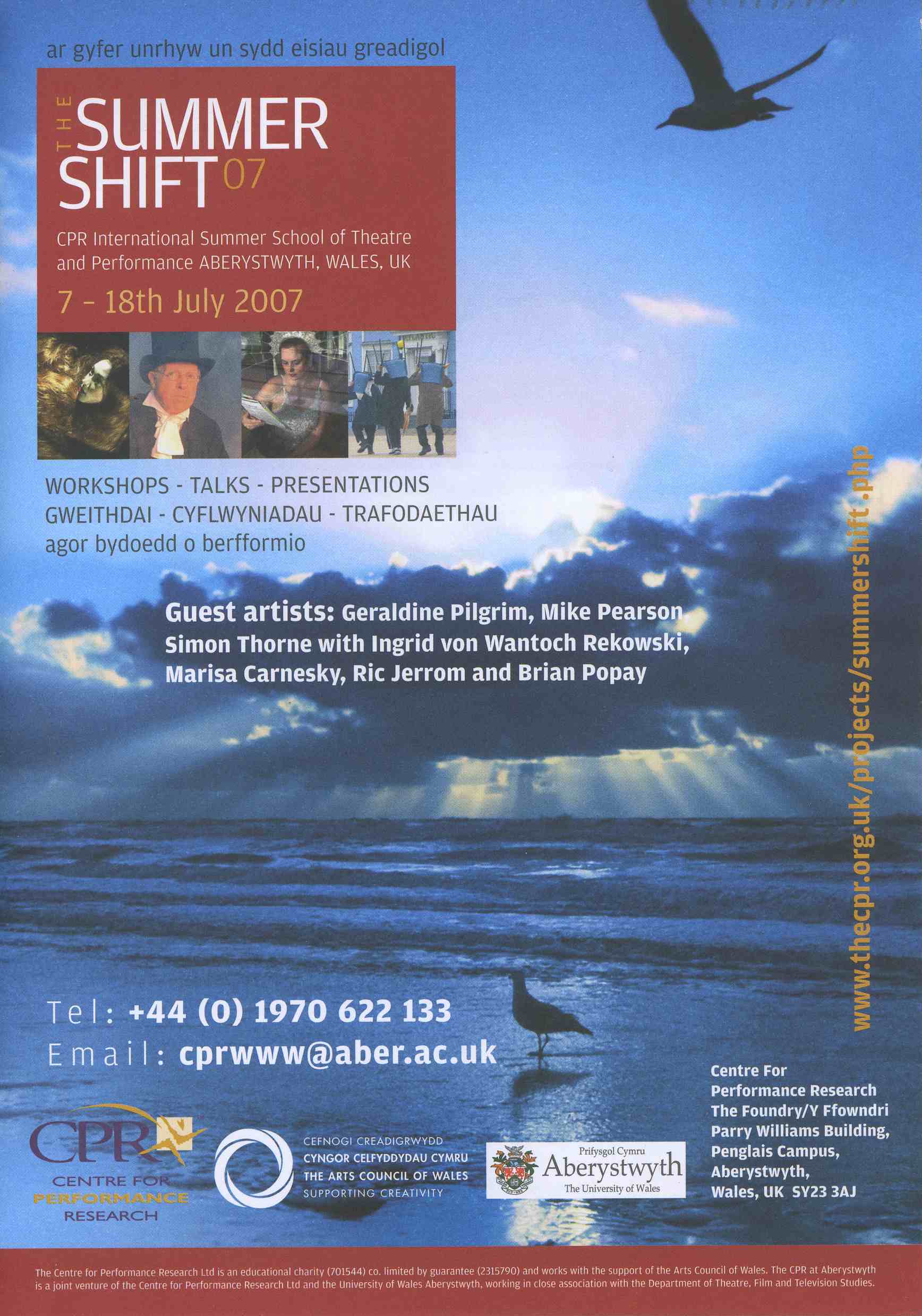 The Summer Shift is an intensive working retreat in beautiful surroundings for those wanting to explore new ways of working and experiment with different processes and approaches to making theatre and performance.

“CPR offers you a unique view on performance… you are confronted with your own work in an inspirational and playful way.”  Summer School Participant, 2002

With a range of high quality workshops and performance laboratories led by some of the world’s leading practitioners, The Summer Shift offers the opportunity to take time out and away from the usual pressures of everyday life to explore your creative practice amongst like-minded participants from around the world.

The Summer Shift is comprised of workshops, talks, discussions and evening events. Participants can either enrol on individual workshops or choose their own ten-day pathway through a series of workshops exploring innovative processes of composition working with landscape, soundscape and visual scores, music-theatre, magic and burlesque, interactive theatre and physical training.

This year’s CPR Summer Shift is a very British affair, indeed. The UK’s theatre and performance ecology has long been distinguished as much for its diversity as for its innovation and experiment, as well as – perhaps – a certain peculiarly British idiosyncracy and sense of the absurd. Each of our guest artists this year have long been significant and formative players in the experimental theatre ecology here in the UK and have developed and sustained distinctive work over many years. The Summer Shift 2007 brings them together to share their compositional strategies, and aesthetic methods and practices through a process of investigation and experiment with Summer Shift participants. The work offers immersion in a range of disciplines and approaches and will take place both in and out of the studio, using sites and environments ranging from the great British seaside to the British Country House and Estate, from Victorian follies to disused quarries.

“I found the workshop enlightening, intense and empowering. CPR is a wonderful resource and the staff well-informed, friendly and accommodating.”  Summer Shift participant, 2006

On our doorstep we have some of the most extraordinary and beautiful landscapes in the UK – Cardigan Bay stretches from Aberystwyth both to the mountains of Snowdonia and to the Pembrokeshire coastal path. Indoors you may spend time in the CPR’s multi-cultural Resource Centre delving into performance archives of videos, books, CDs and DVDs or work in the studio, developing your own project in tandem, building on the workshop training.

Please see below for full workshop information; it may be that you are unable to attend for the full programme and wish to come for only one or two workshops, but if you have the time the accumulative experience of a full Summer Shift goes a long way and is excellent value for money.

A great year too for RAT Theatre: Hunchback, Blindfold – tours of Yugoslavia, Italy and France; performances at the World Theatre Festival in Nancy and The Mickery in Amsterdam. Outrageous, excessive, naïve, swaggering, committed to the moment.
In celebration of the work of one of the most physical theatre groups in the UK and in memory of recently deceased company members, Mike Pearson leads a three-day intensive workshop on RAT Theatre’s bio-mechanic exercises and processes of devising. The work will be physically arduous and emotionally demanding but also deeply rewarding; the intention is to create a short group performance for public showing.

Do these ‘old skool’ techniques still have currency?

Can their re-engagement evoke something of the spirit of the times, rekindling hopes for great happenings? Or are they from a period of theatre so distant now that it might as well be on another planet?

Come prepared to find out!

Mike Pearson is Professor of Performance Studies at the University of Wales, Aberystwyth. He was a founder member of RAT Theatre and later in the 1970s he was Artistic Director of Cardiff Laboratory Theatre, and latterly Director of Brith Gof Theatre Company. Pearson has been working with Mike Brookes since 1997 in the Pearson/Brookes Collective. He is co-author of ‘Theatre/Archaeology’ (Routledge 2004) and, most recently, author of ‘In Comes I’ (Exeter University Press 2006).

Ric Jerrom is one of the leading performers and directors with the UK’s greatest interactive comedy theatre ensemble, Natural Theatre Company (www.naturaltheatre.co.uk/). Brian Popay is a founder member and now Senior Performer with the Company. NTC has been pushing at the boundaries of what is possible in public space for over 30 years, in the UK and all around the world; it is not fanciful to see them as original instigators of the modern, massively burgeoning, “Street Arts” movement. Central to their “Street Work” is the idea that public space is everybody’s theatre: it follows that, in a strong sense, all this work is ‘Site-Specific.

The workshop will be based on the unconventional performance style(s) of the Natural Theatre Company. After a short illustrated lecture participants will investigate turning ideas into Art, Art into actions, entertainment and engagement. As a group you will pursue the achievement of impact through diverse means. In particular, looking at the geography of performance in public spaces and how ‘place’ can call a piece of theatre into being. There will be an emphasis too, on such aspects of Interactive Theatre as gender; number; visual content; and character. Think “Happenings” and bring a sense of fun! We shall animate public space where “every rehearsal is a performance, every performance, a rehearsal” performing in a wide-range of non-traditional theatre locations – indoors and out.

Ric Jerrom is an actor, artist and writer; he is an associate of the Natural Theatre Company, for whom he has created, directed and performed Interactive, or “Street” Theatre worldwide, and conducted visionary workshops at the behests of the British Council, the Gulbenkian Foundation, the Soros Foundation, and sundry Universities – and, of course, with CPR! He is Artistic Director of “The Quest” – which marries visual and performative arts in delightful and communitarian ways.

Brian Popay trained as a fine artist. In addition to his work with NTC he has performed with other companies such as Forkbeard Fantasy. He directed Avanti Display’s Mr Lucky’s Birthday Party and the Skyscape performance at the Millennium Dome. This year he founded the Fine Artistes performance/art company.

A two-day introductory workshop that explores creating atmospheres, working with objects and examining the use of space in site-specific performance.

A five-day workshop that examines creating and devising site-specific performance.
Participants will work individually and collaboratively in both exterior and interior sites; exploring devising work through creating atmospheres and environments using objects and ways of developing narratives that are inspired by site.

The workshop is for emerging and experienced practitioners who are interested in exploring, developing and creating site-specific environments as well as creating narrative often non-verbally through working with objects and atmospheres. It is also a development for participants of the two day introductory workshop.

Geraldine Pilgrim is a designer, director and installation artist. She trained as a fine artist; co- founded and became Artistic Director of Hesitate and Demonstrate the influential visual theatre company which toured Britain and mainland Europe and has since been making installations, theatre based performance and large scale site-specific events. She is an Artsadmin Associate Artist and Artistic Director of Corridor, a performance company that she set up in 2000 to create site-specific events, often working with young people, older people and community groups. Recent projects include Deep End, in Marshall Street Baths, Soho; Sea View for NRLA, Glasgow and Spa at the Elizabeth Garrett Anderson Hospital, Euston. She is currently developing Dreams of a Winter Night, an installation commissioned by English Heritage as part of Picture House at Belsay Hall, Northumberland in 2007.

Since 2004 when Carnesky premiered her groundbreaking and critically acclaimed multimedia theatrical dark ride ‘Carnesky’s Ghost Train’ that toured the UK from Bangladeshi Brick Lane, to Glastonbury Festival, to Trafalgar Square, Marisa Carnesky has been much in demand for her thrilling genre defying performances. Drawing on Marisa’s fascination with Victorian melodrama, sideshow freakery and female erotica, creating a dark, fairy-tale atmosphere reminiscent of Angela Carter, Carnesky’s Ghost Train was part art installation, part visual theatre and part fairground ride – a purpose-built train whisking audiences 20 at a time through a magical environment of optical illusions and performance vignettes.

‘A touring blend of fairground attraction and conceptual art… It has a beauty and elegance we seldom see nowadays.’
The Times on Carnesky’s Ghost Train

‘A mixture of tat and exotica with illusion and magic, [it] offers the audience hard truths about centuries of dispossession and displacement… The piece’s ragged quirkiness is all part of its power, as is the way that Carnesky presents a startling body of evidence about Europe’s invisible people. ‘
The Guardian on Carnesky’s Ghost Train

“I don’t know what I call myself,” says Carnesky. “I’m a live artist, I’m an experimental theatre practitioner, I’m a showman. I use myself and my body and work with live people to create images.”

Marisa Carnesky originally trained as a dancer at the Laban Centre, London, and at the University of Brighton. She has received a number of awards – Olivier Award Best Entertainment 2004, Edinburgh Festival Herald Angel Award 2005 and Time Out Best Theatre Award 2004. In 2003 she launched the UCLA Live International Theatre Festival in Los Angeles and has also developed a decade-long collaboration with the collective Duckie She has been supported by the Arts Council England, Fierce, It’s Queer up North, Nesta and The European Cultural Foundation to name but a few.

SIMON THORNE & INGRID VON WANTOCH REKOWSKI
16-18 JULY
VOICES IN ARCADIA
This workshop explores devising with sound, song, and music to create a kind of mind’s-eye-theatre for the ears that is resonant with the modern world and will also explore how engagement with a particular site location can be retrieved as approaches to soundscape composition. Taking the idea of Arcadia and the nostalgia of Paradise as our point of entry, we will be exploring ideas around the construction of Nature and the emergence of mythologies. What if we take these as raw materials? What stories and narratives can we generate? Taking time to explore the specific location of Hafod near Cwmystwyth, we will be exploring strategies for composing image, music and text that are extracted from site research. We will be exploring strategies for staging sonic performance using our ‘natural’ voices and found sound sources.
Joining Simon Thorne in leading this exploration will be French-German director Ingrid von Wantoch Rekowski, whose Belgian company, Lucilia Caeser, works with the theatricality of choir, polyglot language, and painting to give access to musical forms that in turn give life to archetypes, living pictures and transformational metamorphosis. The text develops beyond words, situations and characters to harmonies, images and choreographic structures instead. The outcome is a unique theatre for the ears – music for the eyes.
The workshop is aimed at theatre practitioners who are interested in exploring notions of sonic performance as well as musicians who are interested in exploring theatre as a compositional tool in relation to musical performance and multi-disciplinary artists who are interested in exploring sonic performance within the context of site related work. It should be stressed that no prior musical expertise is necessary to participate in the workshop.
Simon Thorne is a composer, musician and theatre maker. He was a founder director of Man Act, which, in its time was acknowledged across the globe for its highly charged physical theatre, and its groundbreaking exploration of masculinity. He is also one of the founder members of the Wales Jazz Composers Orchestra. He has recently received a prestigious Creative Wales Award from the Arts Council of Wales to explore new approaches to music-theatre.
Ingrid von Wantoch Rekowski creates living pictures. Through her company Lucilia Caesar, she has created a new drama working with harmonies, images, and structures; where the bodies of the performers merge into a collective monstrous being that is both frightening and erotic. The dynamics of her work borrow from musical forms, human solos, polyphonies, exposing human passion without the psychological connotations. Artistic conventions are twisted and become unclassifiable. The spectator can dream and imagine, freed of focusing on an outcome.