A rare opportunity to see the largest, most comprehensive collection of material on the work of Jerzy Grotowski ever shown in public. 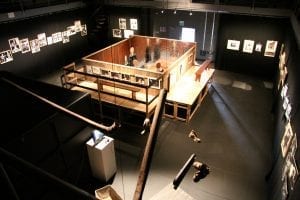 This exhibition aimed to recall the spirit which animated the performances of Jerzy Grotowski’s company from its beginning in the 1950s until the 1980s, covering the period of its productions and its subsequent development during the ‘Paratheatre’ phase (in the 1970s) and beyond, including a focus on the ‘Theatre of Sources’ and connections with Indian culture.

The exhibition included a reconstruction of the set of The Constant Prince built from original materials, with original costumes and props, and original parts of the set and props from Akropolis. It included further rare posters, drawings, designs and rare films and videos. A special section, commissioned for this exhibition, presented new pictures by photographer Francesco Galli of the places and protagonists of the Theatre of Sources.